Manufacturing and insurance: are you ready for industry 4.0? 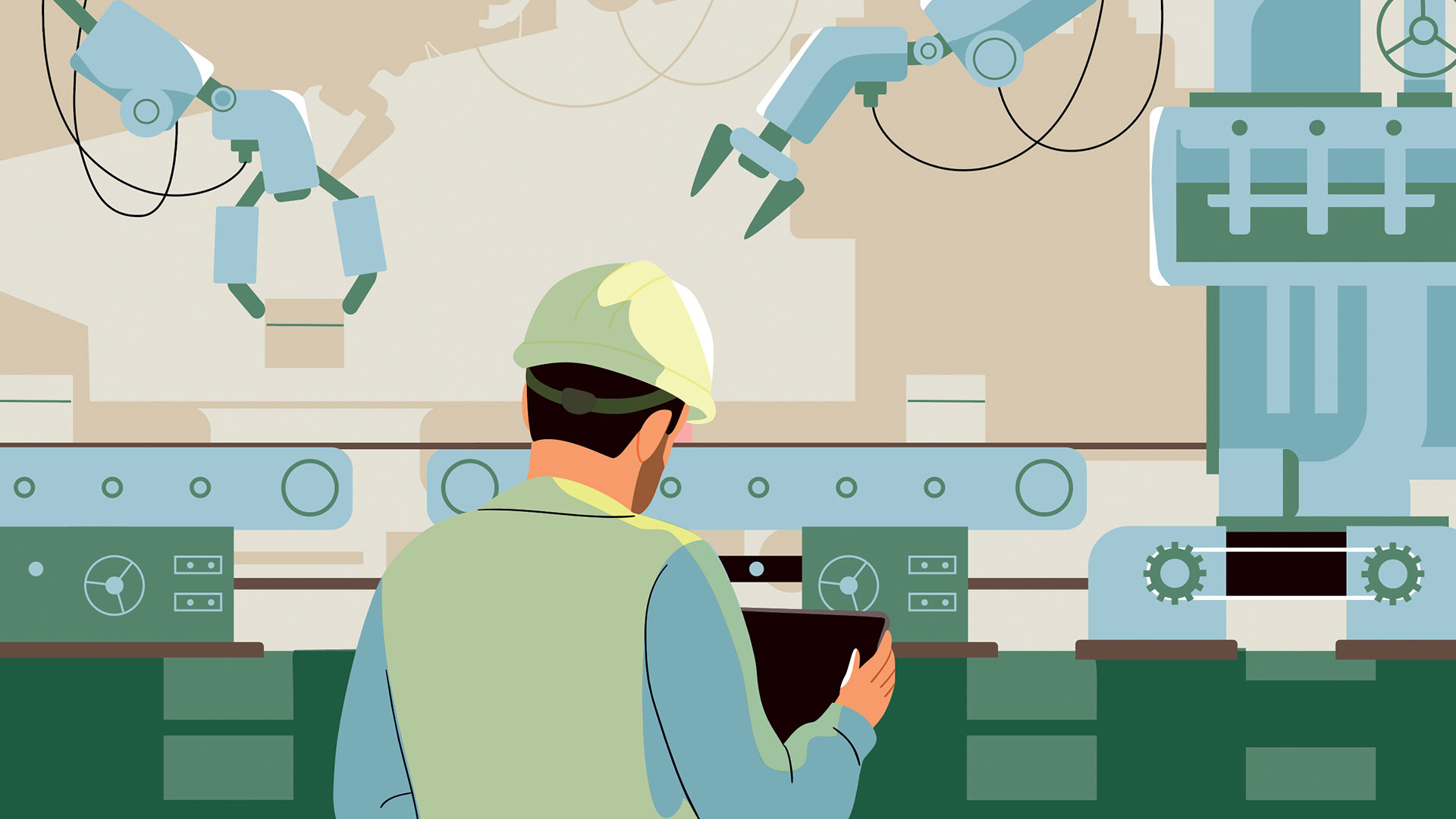 Located in Dongguan in China’s Guangdong province, the facility, which once employed 650 people, is now believed to employ about 20 staff members who monitor everything through a central control system.

Welcome to the fourth industrial revolution (Industry 4.0). This brave new world is reimagining everything we thought we knew about manufacturing. It’s creating new opportunities for businesses, improving productivity and efficiencies, reducing costs and helping to better the customer experience.

‘The scale and pace of change we are seeing is unprecedented — and technology is one of the biggest drivers of an altering risk landscape,’ says Nick Sordon, head of casualty underwriting, Australia & New Zealand, at Swiss Re.

‘New manufacturing methods and processes through technology have a marked effect on the risks and exposures faced by manufacturers.’

Some of the new technologies Swiss Re sees as leaving their mark include robotics, 3D and 4D printing, the Internet of Things (IoT), artificial intelligence (AI), machine learning, augmented reality, virtual reality and nanoscale manufacturing.

‘While there may not be a dramatic change to the end products, the processes used will continue to evolve,’ says Sordon.

And this will lead to a range of different implications and impacts.

‘For example, there’s a human effect as we see a continued reduction in the need for certain jobs,’ says Sordon. ‘There’s a dynamic shift in the skillsets required in the manufacturing workforce. And, with increased automation, there’s an increased need for energy.

‘Supply chains are also becoming progressively more automated through the value chain, from raw materials procurement to the delivery of finished products.’

THE FOURTH INDUSTRIAL REVOLUTION: ANOTHER BATCH OF NEW RISKS

As with most new manufacturing processes, new risks often emerge. ‘This has been seen throughout history each time a major change in industrial process has occurred, from steam, to mechanisation, to electronics,’ says Sordon.

He believes the new risks fall into two groups: first, the risk created by new methods and second, the risks that may be inherent in the products themselves.

When it comes to end products, there could be safety or quality concerns. ‘New methods can occasionally take time to manifest as product risks,’ he says.

‘This has been one of the challenges with 3D printing and hazards potentially posed by nanotechnology. Such risks can also lead to an increase in the recall of products.’

On the production side, Sordon says there’s the risk of fires — for example, from a greater exposure to lithium-ion battery manufacturing, which is expected to play a crucial role in the likes of energy storage, transport and consumer electronics (see breakout left).

New manufacturing methods often create new occupational health and safety hazards for workers. ‘This has been shown over history, either through increased acute injuries or illnesses that can take many years to manifest,’ says Sordon.

Cybersecurity is already a huge concern for many industries, including manufacturing. But as industries increasingly use IoT devices and connected machines, he says their vulnerability to cyber attacks will also rise.

Bruch adds that digital products could also boost technical and litigious risks. ‘Liability claims may be levelled against the developers and vendors of predictive maintenance software in cases where injury or death occurs,’ he says.

THE IMPACT OF INDUSTRY 4.0 ON INSURERS

Sordon notes that industry evolutions or revolutions inevitably change the needs of insurance over time. ‘But risk is our business and the (re)insurance industry has been dealing with new production methods for more than 100 years,’ he says.

‘That said, the industry doesn’t always get it right. However, (re)insurers who put time and energy into enhancing their knowledge, critically analysing experiences and adapting their pricing, coverage, underwriting and claims management will capitalise on the opportunities presented.’

Bruch expects the shifts to stimulate innovation in new risk-mitigation solutions in areas such as intangible risks — for example, brand, intellectual property and cyber.

Also on the positive side, he says workers compensation and general liability insurers could benefit as sensors and autonomous machines increasingly prevent accidents and limit toxic exposures.

‘For example,’ he says, ‘with the reduced reliance on fossil fuels for mobility, some Chinese cities are progressively banning vehicles with traditional combustion engines to be replaced with new energy vehicles [NEVs]. Therefore, there is a need for increased lithium-ion battery production.

‘This trend brings new challenges for the auto industry. In response, Swiss Re has partnered with our clients to develop solutions such as a new extended warranty insurance product on batteries for NEVs that offers protection against battery failure and degradation risk beyond the standard warranty cover.’

In October 2020, Hitachi and Swiss Re Corporate Solutions announced a new bundled technology and integrated warranty solution. Initially focused on the manufacturing machinery and transport industries, it will help customers embrace AI and cutting-edge technologies to maximise productivity, increase automation, implement contactless operations and reduce downtime, while also insuring them against any unexpected business disruption.

‘Through this partnership, we are activating machine-sensor data and continuous diagnostics across the industrial sector,’ says Andreas Berger, CEO of Swiss Re Corporate Solutions.

‘Ultimately, this will enable us to price risk more precisely, ensure effective pay-out mechanisms and provide a seamless risk management experience that addresses industry inefficiencies and is tailored to our customers’ needs.’

More sophisticated products can be expected in the future.

One reason is that while Industry 4.0 technologies were already transforming Asian manufacturers’ operations before COVID-19, their use has picked up since it struck, according to a McKinsey & Company study.

Indeed, 39 per cent of Asian manufacturers polled said they had implemented a nerve-centre, or control-tower, approach to increase end-to-end supply-chain transparency. And around a quarter were fast-tracking automation programs to stem worker shortages arising from COVID-19.

As we move forward, we may also be increasingly talking about the Industrial IoT (IIoT). This refers to the billions of industrial devices used in factories that are filled with sensors, connected to wireless networks and gathering and sharing data.

China, backed by positive and proactive government support, is becoming a leader in this area, according to the GSMA, which represents the interests of mobile network operators worldwide.

Indeed, the GSMA predicts China will account for one-third of the global IIoT market by 2025.

‘Overlaid with AI, cloud computing and advanced analytics, factories can monitor and interpret data from production lines and complex machinery in real time to anticipate faults, manage infrastructure and mitigate risk,’ says the GMSA in an IIoT report.

‘The captured data will, in turn, drive efficiencies, optimise productivity and decrease costs in many important economic sectors beyond manufacturing, such as resources, energy and telecoms.’

THE MANY RISKS OF LITHIUM-ION BATTERIES

State-of-the-art lithium-ion batteries are increasingly being used to store electricity and in the manufacture of digital devices and electronic vehicles of all types. But while they are lightweight, high-performing and cost-efficient, they also bring risks — especially fire risks.

Swiss Re’s SONAR New emerging risk insights June 2020 report notes that through mechanical damage, overheating, short circuits, overcharging or production defects, a lithium-ion cell can reach a temperature at which heat increases rapidly, with a sudden release of the energy stored in the battery.

This can result in flammable and toxic gas leaks and fires. And once lithium-ion cell fires start, they can be hard to extinguish, as they do not need oxygen to continue burning.

Swiss Re says the fire hazards associated with lithium-ion batteries span their entire value chain. It lists the following risks for insurers:

GETTING SMART ABOUT SMART DUST

In its SONAR New emerging risk insights June 2020 report, Swiss Re predicts that tiny devices — called ‘smart dust’ or microelectromechanical systems (MEMS) — are set to revolutionise the way we manufacture and gather data.

‘Made of minute slivers of silicon and guided by software, the sometimes pollen-grain-sized MEM devices are released like dust into an environment to measure light, vibration, temperature, noise or any other physical force,’ the report notes.

‘Working simultaneously and autonomously, they store and relay data wirelessly back to a server.’

The experts suggest that MEMS could, for example, be embedded into paint to monitor aircraft stress or how vehicles are being driven. They could also be used in ‘smart’ manufacturing where the materials themselves — with appropriate ‘dust’ applied — dictate the manufacturing processes.

The possibilities are many and so are their risks, including:

But Swiss Re adds: ‘All these issues make underwriting the technology problematic. As smart dust is not expected to hit the market with a big splash, but rather appear slowly over the next decade as more and more of the research initiatives reach market readiness, underwriting risks may remain under the radar.

The city of Suzhou, in eastern China, is now home to one of the largest 3D-printed structures in the world — a massive 500-metre-long river protection wall built in 2019 by a company called Winsun.

The wall, installed along the Shanghai-Jiangsu Port waterway, was designed to absorb and deflect the energy of strong water currents, protecting the surrounding land from destructive shoreline erosion, soil contamination and flooding.

It is another example in the use of 3D printing, which Shams Rahman, a Professor of supply chain and logistics at RMIT University in Melbourne, expects to become one of the biggest disrupters in the future of manufacturing.

But, he says, ‘as with all new technologies, there are uncertainties and known and unknown risks. For example, we still don’t have any regulation on how we are going to manage the different parts of the 3D-printing process, including design and production.

‘The risks could include the quality of products made and possible counterfeiting. There are also cybersecurity risks, which could put insureds’ intellectual property in danger.’

That said, Rahman believes combining new technologies also holds the key to reducing their risks. ‘For instance, if we move our 3D-printing data and store it in blockchain, no-one will be able to tamper with our data or copy our products.’

In the past, manufacturers and suppliers were responsible for the goods they produced and sold. 3D printing, however, may see responsibility broaden to include product designers and internet platforms, as well as printer and software manufacturers.

Weichert points to the question of whether the original blueprint itself could be considered a product, as defined by a country’s product safety law, for example. ‘If so, then 3D printing could see liability in such cases extend to include the designer of the blueprint.’