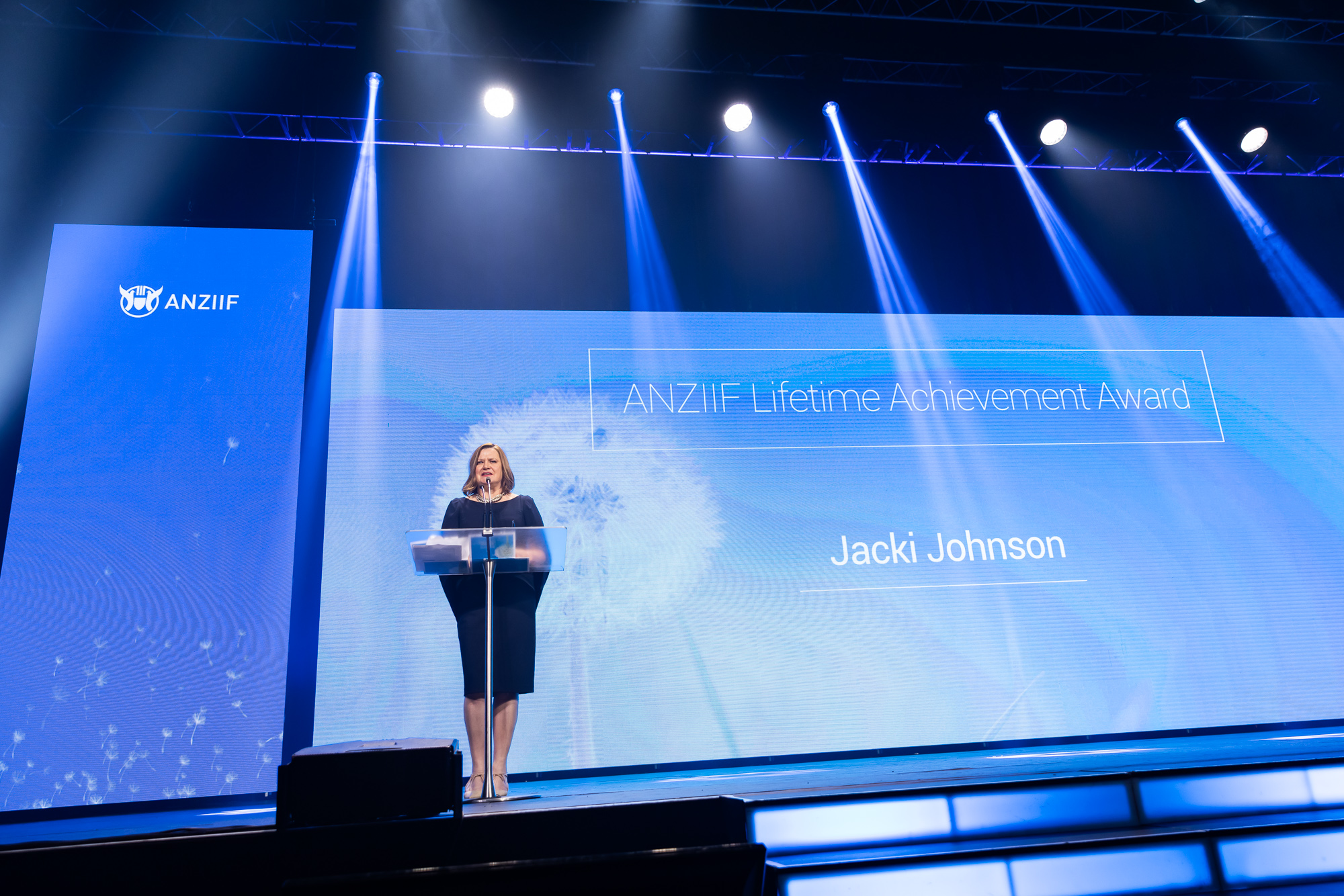 Jacki Johnson has had an illustrious executive career, but she came from modest beginnings. Born in Liverpool, England, her family emigrated to Australia when she was six years old. ‘My parents were £10 POMs, but children were free. So I arrived free,’ Johnson recalls.

She describes her father as a very smart man who had to leave school at 14 in order to work. ‘His mantra was education, because he never had the opportunity. So it was expected that you do well in school and go to uni,’ Johnson says.

Johnson wanted to be an engineer because she was good at science and maths, but says, ‘my father, working in factories, and sexist of course, thought that this was the worst thing for his daughter to do.’

So she did a Bachelor of Science in Occupational Therapy at the University of Sydney.  ‘I landed my first job at Westmead hospital and I worked in burns, amputees and head injuries. As a 20-year-old, it was very confronting seeing people who had lost limbs through work accidents,’ says Johnson.

‘I was fascinated about how do these accidents happen? And why should they be prevented?’

Ford Motor Company had partnered with their insurance company to open a new rehabilitation and prevention division. They were looking for someone for a role in injury prevention and rehabilitation, and importantly, they would need to be able to handle being on a shop floor.

‘I thought I'd made it because I was going to get to work with engineers. My father was beside himself because the job he held in the UK was on the shop floor in Ford. He used to like telling the neighbours that I was a health professional, probably told them I was a doctor. And here I was going to be in factories,’ Johnson says.

Johnson eventually went on to become director of the NSW WorkCover Authority and Personal Injury Education Foundation. She spent 25 years in the insurance sector, 17 of those in executive roles with Insurance Australia Group until 2019, including CEO of the insurer’s New Zealand business from 2010 to 2016 during which time she was named NZ Herald Executive of the Year. She was also President of the Insurance Council of NZ and Chair of the Christchurch Recovery Chief Executive Forums. ‘I had a belief that I have to play my role in changing the system,’ Johnson says.

Johnson has been called a pioneer, innovator and disruptor. Looking back on her career, many highlights make her proud.

She remembers a time in the 90s when she was not allowed to wear trousers in the workplace and she was often the only female around an executive table. ‘I think of so many female leaders who had to endure those times. Our male colleagues realized it wasn't right either. And working together, we changed what was acceptable behaviour in our sector,’ Johnson says.]

Johnson is not a fan of quotas, believing that jobs should be about merit. She says that is it important to

‘make sure our pipelines are strong and inclusive of diversity, not just gender but indigenous, disability and refugees too. Diversity has real benefit for innovation and thinking. But it's also about making sure people have a sense of belonging.’

Johnson was an early adopter in the area of reconciliation, before RAPs were commonplace. ‘I got to see how integrated the Indigenous agenda was in New Zealand, where about 40% of my workforce was Maori. So when I came back to Australia, I lifted my commitment to the highest level of reconciliation action plans,’ she says.

While this is a big cultural issue for Australia, she thinks that there are also real opportunities for the insurance sector if we understand the Indigenous stories about care for country and the mitigation of climate change.

‘I'm very proud of the effort of my teams when we've led through Cyclone Yasi or bushfires and New Zealand earthquakes disaster recovery.  That's when we see our people at our best, when people are really hurting because they've lost everything,’ Johnson says. ‘I'm also proud of the role IAG played at the UN level and with Australian Sustainable Finance Initiative (ASFI) because that's systemic change,’ she adds.

Johnson also lists her work on IAG’s first online start-up business, The Buzz, as a career highlight. ‘This was 2007 and iPhones weren't in Australia yet and Twitter and Facebook were just launching. It was quite revolutionary for an insurance company that had very strong brands to say what if we got disrupted,’ she says.

‘I could see the wave of technology coming. And I was lucky enough to be supported to go to Silicon Valley. I learned so much about what a new economy would be, and I learned a lot about social media, which helped me throughout my career.’

‘I think it's the only time my daughter really thought that my career was cool because I was, in her eyes, CEO of an Internet company,’ Johnson says.

When asked about the future of the sector, Johnson would like to see insurance as a career of choice for people starting out, rather than an afterthought. She thinks that the sector has got a bit of work to do helping people see what a rich career it can be and that they can make such a big difference in society.

‘It’s not just about the climate agenda, but the social agenda. So how are we playing our role on the things about an inclusive society that will help us help cities and our country thrive? How will the agriculture sector transform into decarbonised? How do we play that role on supporting the future businesses and skilling up to make sure we got the right skills to be able to underwrite new types of businesses?’ she says.

Since retiring, Johnson is busier than ever. She continues to be a mentor for the next generation of talent and is passionate about the growth of the insurance industry. She remains an advisor to IAG on Climate, Sustainability and Resilience. In 2020, Johnson commenced her PhD Candidature at UOW. ‘Nothing stays still,’ she declares.

When accepting the award, Johnson gratefully acknowledged her past colleagues, friends and family who have supported her throughout her career.  ‘You're only as good as the people around you,’ she says.

Meet all the 2022 ANZIIF award winners